Adult stem cells have been identified in many tissues and play an important role in tissue function and pathogenesis. It has been hypothesised that malignancies arise from either mutation of these adult stem cells or that tumour cells acquire stem like characteristics; the so called cancer stem cell theory. However isolation and characterisation of these cancer stem cells is problematic due to the lack of specific stem cell markers. Our group has used the Hoechst 33342 dye efflux technique to identify a side-population (SP) from renal epithelial cells enriched for cells with stem cell characteristics.

Unlike the marker approach to stem cell isolation in which stem cell/progenitor cells are immuno-stained with fluorescently conjugated antibodies against putative stem cell markers and isolated by fluorescent activated cell sorting (FACS), the Hoechst 33342 dye efflux assay isolates based on the functional ability of stem cells to actively efflux cytotoxic agents such as Hoechst 33342.  An added function of the assay is the ability to isolate cells and further sub-fractionate the SP to further enrich for stem cells. Characterisation of these SP cells is hampered by the lack of cell numbers, below the level required for traditional ‘omic’ techniques and stem cell markers. Here we present a novel approach to characterising small numbers of SP cells by FTIR. 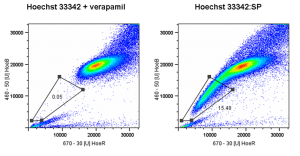 Renal epithelial cells were stained with Hoechst 33342 prior to sorting on a FACS Vantage cell sorter, using the inhibitor Verapamil to define the SP gate. The FACS sorted isolated cells were formalin fixed and cyto-spun onto CaF2 substrates for Synchrotron (SR) FTIR-spectroscopic analysis, whereby single point spectra and chemical maps were acquired for each cell type at two synchrotron sources.

SP cells are very small essentially consisting of a nucleus and limited cytoplasm and have previously been difficult to analyse spectroscopically due to their high Mie scattering properties. We are able to show that the stem-like SP has a distinct chemical phenotype to the rest of the renal cells.